We have learned so much during almost 2 years in Shanghai and yet, broke the most important rule: Do not travel in China during national holidays. However, the 1st of May holiday was our last long weekend left in China (we will reveal soon where we’re going next…) and it seemed like a no-brainer to visit Xi’An before we leave. What should I say? It was busy. Very busy!

There are many reasons to visit Xi’An as this ancient capital has much to offer, especially when it comes to Chinese historic and archaeological wonders. The main reason for most tourists to visit Xi’An is the Terracotta Warriors of Emperor Qin Shi Huang, which were buried with the emperor in 210–209 BCE and discovered in 1974 by farmers digging a water well.

Our tour guide recommended visiting Banpo Village first, which was discovered in 1953 and displays the remains of Neolithic settlements about 6,000 years ago. My favourite story about this particular settlement is that only women lived in the houses, as this was a matriarchal society, and men were only allowed to come and visit for a short while, but never to settle down with the women. The most disturbing story that our guide told us at Banpo Village was that babies and young children often died early and were buried in pottery jars near or in the house, so that their spirits could keep living with their mothers.

We visited the Banpo Village and Terracotta Warriors the day before the national holiday started and yet it was already fairly crowded. As of today, you can visit three different pits displaying different terracotta warriors and each has a slightly different story to tell. Unfortunately, our verdict about Banpo Village in particular, but also the Terracotta Warriors, is that what sounds like a spectacular archaeological site, actually felt like another mass tourism attraction in China to us. Our tour guide told us a good three hours (if not more) worth of stories, however, many stories are just archaeological assumptions and remain unclear.

As we returned from the Terracotta Warriors into Xi’An’s walled city, the sunshine had returned to us and we decided to explore the area around the Bell Tower and Drum Tower by foot. As both towers looked very interesting from afar and at the same time very crowded, we decided not to go inside. Instead, we enjoyed the upbeat vibe around this area and let ourselves drift into the Muslim quarter…

Almost everyone we told that we’re going to Xi’An said: “The food there is amazing, especially in the Muslim Quarter!” Having visited Malaysia last year and grown up with a growing Muslim influence on the food industry in Germany, our expectations were high and mostly wrong. Having just visited Yunnan, we were disappointed to find almost all of the same touristy street food in Xi’An and rarely anything new. However, this is not to criticize the Muslim Quarter, which we loved spending time in at night. We did have one very good homemade noodle dish there, but also many other disappointing snacks. Despite that, the Muslim Quarter had a unique feel to it with quirky vibes and night markets. We spend every evening wandering and getting lost throughout the maze of this area and couldn’t get enough of just people watching, especially during this busy national holiday.

After four days in Xi’An, we kind of lost track of how many people were staring at us, “secretly” (or most often very obviously) taking photo of us, asking us to take photos with them and calling us “wai guo ren” (foreigners). Welcome to China on a national holiday!

Xi’An’s wall was definitely our highlight and we even walked and cycled it. The first time, we walked from the South through West to North gate which took us about 2 hours and we loved it, as the weather was superb and we could take our time to look beyond and inside the walled city, taking in every little detail. We decided that two hours walking was enough and were keen to get off the North Gate from where we could walk and then cycle around the Daming Palace Park – which was our second highlight as it was not crowded at all!

On our last day, we decided to cycle around the whole wall and it was fun, but on the whole we didn’t enjoy it as much as walking, as some parts of the wall are quite uneven and we couldn’t take the scenery in as much. If you decide to rent bicycles, clarify with the staff first if you can cycle the whole way around, as they might close parts of the wall. 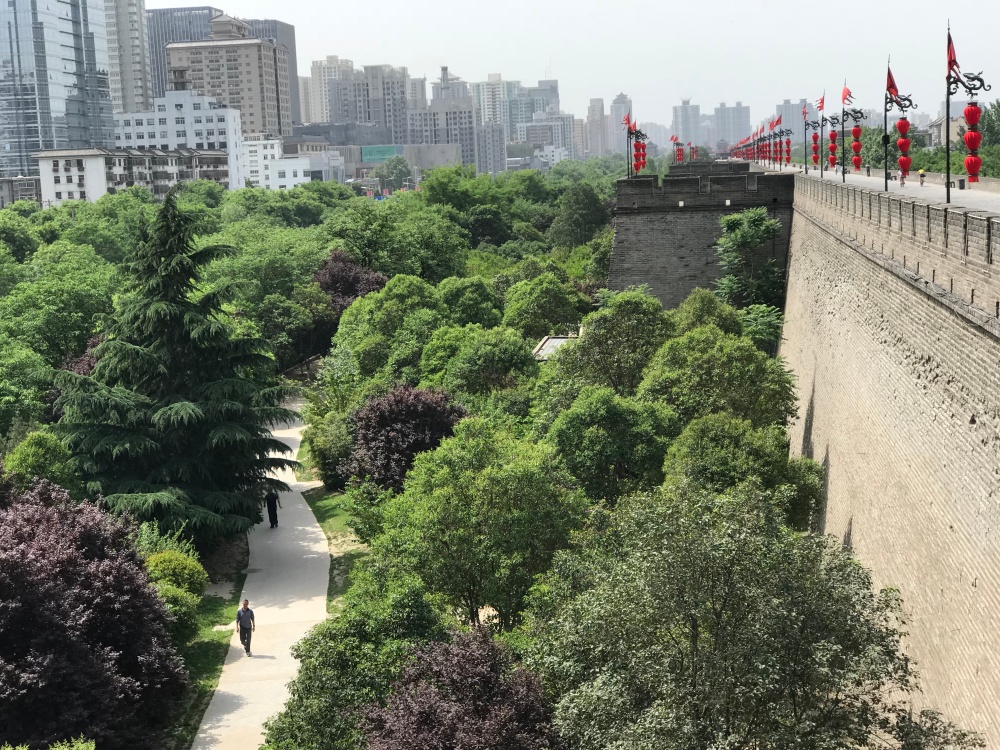 I envisaged a day of peace and tranquility around the Wild Goose Pagoda and its two big lakes and parks surrounding it. It was a national holiday, so I was wrong. After we got increasingly annoyed with people staring at us, people blocking entrances, tacky techno music along the lake and food poisoning o’clock at the food court, we were happy to leave and even more happy when we discovered a German beer garden next door with. no. people!

On the whole, we mostly enjoyed Xi’An’s nightlife with the gates beautifully lit up, craft beer breweries, bars and the busy muslim quarter, as well as walking along the wall and cycling through the quiet and peaceful Daming Palace Park.

Have you been to Xi’An? What did you like the most?