The first day we arrived into Shanghai I spotted a place I definitely wanted to go: the Shanghai Zoo! Last Sunday we fulfilled my little dream and walked to the zoo by foot as it’s not far from our compound. The entrance fee is very cheap – only 40RMB! First we went through the section with the crocodiles, turtles and all the different snakes and fishes. I found it very upsetting to see the turtles swimming in such a small aquarium they could barely perform a volte-face and most other animals had little space as well. (Later I learned from a Chinese friend that there are no animal protection rights in China :-(.)

The section after that was all about birds and these first two areas were so overcrowded by families with small children, that sometimes we couldn’t be bothered to stop and try to take a proper look at the animals. However, some were really worth seeing: 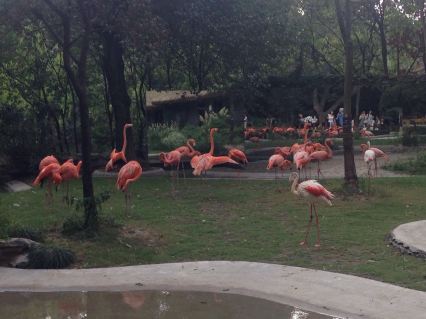 As you can probably tell from the pictures, the hygiene and cleanliness aspect wasn’t particularly high at this zoo (hence probably the low fare). While we were bird watching, we noticed that some Chinese children found it more interesting to look at us rather than the birds – it seemed that we were the only non-Chinese in the zoo at that time and many people stopped just to look at us or to take a secret photo. Something that we had to take a photo of was this strange translation for ’emergency stuff’:

Finally, we got to see the giant pandas! They looked so cute and were just laying there eating bamboo, looking happy. The lions and gorillas that we saw at the end looked extremely exhausted by the heat and just napped stretched out. To be fair – we were knackered by the end of that long  3 hour walk around the zoo in the heat as well and went home just as the zoo closed with street food pancakes and tofu in our hands.